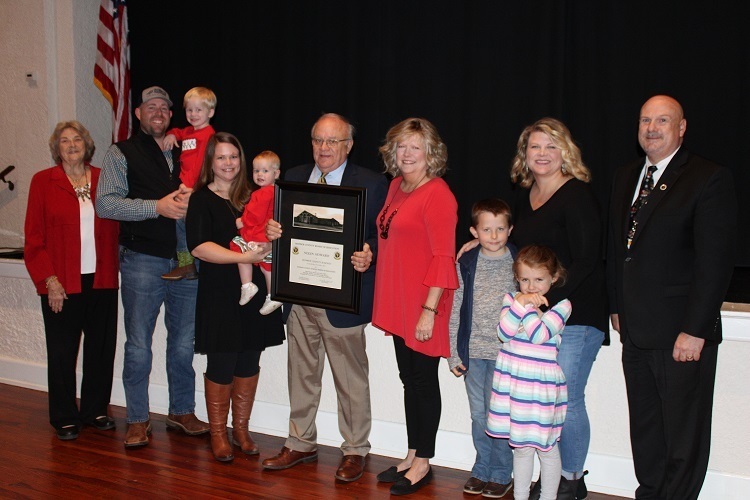 Thirty years ago, Zell Miller was Georgia’s governor. George H. W. Bush was President. Charles Dumas was Superintendent of Schools. And Nolen Howard received a call from a Monroe County Grand Jury. “We’re appointing you to serve on the Board of Education.” the caller said.

In July of 1992, he became the last board member to be appointed rather than elected. Subsequently elected seven more times, his 30 years as a board member is second only to the late J. P. Evans’ 43-year tenure. Mr. Howard also served multiple terms as vice chairman and a term as chairman of the board.

Before taking his seat on the board, Mr. Howard served as a Monroe County Commissioner.  He has worked closely with the Forsyth-Monroe County Chamber of Commerce, the Monroe County Historical Society, and recently was on the planning committee for Monroe County’s Bicentennial Celebration.

But his service to the school system extends even further. After graduation from Mary Persons, the University of Georgia and Georgia College, he came back to Forsyth and taught at MP. He was part of the crew that recorded play-by-play (for next-day broadcast) of Bulldog football games. And in 1978 he started keeping sideline statistics for the Bulldogs.  In that 44 years, you can count the games he has missed on one hand.

Mr. Howard’s LinkedIn profile carries this quote:  “I believe that the most important thing we as adults can do for subsequent generations is provide them with the ability to think critically and be prepared for life as an adult.” This belief has guided his decision-making on the Board of Education.

“Tonight, we are honored to recognize Nolen Howard as a true Friend of Education – not only for his service on the Board of Education, but for his dedication to the students and staff of the school system and to the community,” said Dr. Mike Hickman, Monroe County Schools Superintendent.  “Mr. Howard, as you leave the board at the end of the year, please know the influence of your leadership will remain for years to come.”

A “Friend of Education” is a person or business that is making a profound and positive impact on students, staff, and the community through supporting Monroe County Schools.